Weighed in at 220 pounds today. 221 yesterday. I need to keep this up. I plan on having a long day at the gym tomorrow. I’ve got a midday meeting and a lot of work, which will make it tough. But if I gain back a lot of this weight I recently lost, I’ll be very bummed out.

So “fatblogging” is all one word I think. I need to make sure I write it that way if I want folks to find my stuff I’m writing. I think I’ll use both “fat blogging” and “fatblogging” tags from now on out. I dunno.

Check this out. My fat picture was in the snapshot of Calacanis’ site on Alexa. Nice. 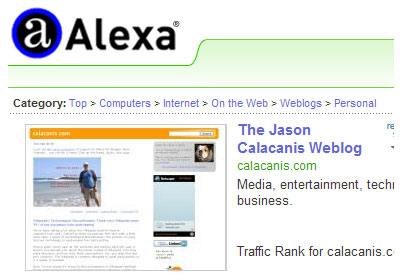 I think I will credit our dancing for the nice results I’ve had this past week. In addition to going to the gym about every other day, Kim and I have been dancing for at least 1hr every night. Dancing isn’t too rigorous, but it’s about equivelent to a semi-brisk walk. I imagine it’s at least another 200-400Cal burned every day. And we’re having a ton of fun too.

Yesterday I ate terrible, but not too much (quantity-wise). And so I think I stayed close to 2000Cal. I had a Sausage McMuffin with Egg for breakfast. They gave me a hasbrown that I didn’t order, so I ate that too. That’s about 700Cal according to this nutritional chart at McDonald’s website. For lunch/dinner I had a dozen ranch chicken wings and some nachos at the Pike Cafe, a great place to get food and drink in Reading, PA. Chicken wings are about 100Cal each and I’d say I ate 400Cal worth of nachos. That puts me at 2200Cal. I also had a glass of white wine at night for a total of 2300Cal or so.

I’ll go over what I ate today, even though I know I’m over. For breakfast/lunch, Kim and I went to Minella’s Diner in Wayne. I had a huge ham and cheese omelet with spinach, hashbrowns, and wheat toast. I’m thinking 4 eggs, 3 slices of cheese, and 200Cal worth of ham in the omelet for about 1000Cal total. Toast = 300Cal. Hasbrowns about 350Cal, putting me at 1850Cal right there. I also had a slice of toast with jam at home early in the morning for 150Cal. Dinner was some great chicken rice soup Kim made. A couple bowels of that would have run me 500Cal. I had about 400Cal worth of tortilla chips and salsa. Later, Kim made banana bread muffins. I ate one with a small cup of milk for about 400Cal. That puts today’s total at around 3400Cal. I hope I overestimated some things in there because that’s about 1/4 of a pounds worth of calories I overate today.

No worries. If I stay on my regime, I should do alright. One more quick tidbit before I go. Last night I dreamt that I had 2 cans out of a six pack. I was holding my shirt up, and Kim was poking at my abs in awe. I woke up and took a look at myself in the mirror. No six pack. My stomach was still flabby, although less so than usual. I also thought my chin and neck area looked nicer. This is probably the most I’ve been motivated to lose weight in a long long while, possibly ever. I credit about 50% of that to the upcoming wedding and about 50% of it this fatblogging movement. Only a couple weeks old, it’s already having an effect on me. I hope we can keep it up.