I just got turned on to this web comic that every real hacker has known about for a while: xkcd.

This comic there got me laughing a bit…

… even though I don’t really condone the “make me a sandwich” behavior, attitude, or stereotype.

I had to break the Wacom tablet out for a client project last night and got inspired. I decided to have a little fun this morning.

What I’m doing is drawing very fast, whatever comes to mind. After a while, I scribble a bunch, then add a new layer to the drawing. I set the opacity of the old layer down to 10% and it becomes the inspiration for the next round. You can get some pretty good stuff this way, and can tell a story with the decisions you make: which lines to darken, which strokes to turn into the next piece.

Anyway, here it is. I am drawing fast, but this is also sped up 4x. Enjoy.

This was made using the “Old Guy-Mean Guy” technique and another photo of me from the Dominican Republic (it’s the only photos I have on this computer).

The piece is significant because it represents my first portrait with a non-round head shape. I also realized that saving these things in gif format saves a bit of space.

If you are feeling brave, take a look at the original photo. It’s such a terrible photo. I had to put it in monochrome so I’d look at least somewhat presentable. Although the header pic doesn’t really do me justice either.

Here’s another Mean Guy, which I am fond of.

In other news, I don’t know when “Making the Blog Part 2” will be written and posted. I’m moving into my new place this weekend. My guess is the sequel will show up sometime on Monday.

While messing around with some logo ideas for a possible client, I came up with this pic: 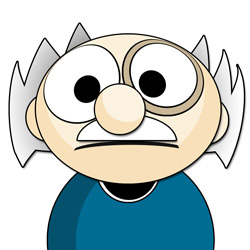 This was done in Photoshop. I basically drew a bunch of circles on different layers, outlined them with the “stroke” layer effect and did some choice “spherizing” to make things look less flat. It’s a nice effect I think, and I plan on making some more characters like this. Below is a link to this same picture and another one made with my “new technique”. 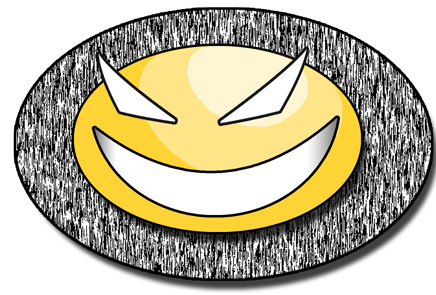 p.s. Look forward to an ART category in the menu.

I am Jason Coleman. I run a WordPress plugin business with my partner and wife Kimberly Coleman. I'm the father of 2 awesome kids.

I write about work, parenting, business, investing, and whatever else comes to mind.

Use the form here to join Jason's mailing list. Get all of Jason's new posts direct to your inbox.